Why I Love Where I Live

I really  do love where I live and I wouldn’t want to live anywhere else, (except maybe an island like Richard Branson’s).  Like many small communities in the bush, they are unique and filled with wonderful, hard working, salt of the earth people, who would help anyone at the " drop of a hat”. Who love their town and would do anything for it, then add in a couple of local characters,  an extensive calendar of events and there you have it.

My family and I live near a small remote town called Carinda in far west NSW, Australia.  It has a population of about 30 in the town itself, but in the wider region there would be about 180. It has a sort of "Walkabout Creek" vibe like in the movie Crocodile Dundee, a real diamond in the rough, though without the crocodiles. Its mainly a farming area made up of sheep, cattle, cotton and cropping and quite isolated, and with summer temps reaching 45 and winter -1, I will be honest its not for everybody. There is no Starbucks, no grocery store, the nearest town is 80kms away, but for the people that call it home they would say they are extremely lucky.  Everybody knows everybody and its very hard to keep a secret, and you've heard of the “Bush Telegraph” its not just a saying, it truly exists. Generally by the time a rumour or conversation has been overheard, it usually gets back to the person concerned stretched, pulled, added and embellished quite a lot and sounding nothing like the original version.

It may look like a quiet sleepy town and you would most probably drive through and not give a second glance, a town that had fallen on hard times, and with years of drought  certain industries closed down and jobs lost. Though blow the dust off  and you would find a small town with a band of hardworking community  minded people who love where they live and have immense pride for their town and community. They love to share and promote all the great things that make us unique.  You will notice in the Anzac pictures, we are a very patriotic bunch and on Anzac day the  whole district gathers to pay tribute to our fallen. We then cross the road to the pub, people catch up, stories are swapped, an old carpet square( used only on Anzac Day) is position in the centre of the pub floor and "Two Up "is played.﻿

We hold many community events and fund raise for many charities over the year, our annual races swells the town to 800 people, this year marking a 100 years of racing in Carinda, so god only knows how many will turn up this year. Numerous car Rally's come through Carinda and we have quite a reputation in regards to hospitality and  our culinary delights that we provide (we have some amazing cooks that would rival any  Master Chief contestant). Wool days, Golf days, Camp Drafts, then toss in an odd Black Tie Ball and you might have just scraped the surface of this diverse little place, and the people which make it GREAT. (I would just like to add everybody volunteers their time for all the events, so you can imagine the hours that  people provide, and they do it with a smile on there face.)

One of Carinda’s big claim to fame was that David Bowie filmed his “Lets Dance” music video in our little pub, yes thats right “David Bowie” came to Carinda ( god I wish I lived here then). I remember a couple of years ago a BBC TV crew came to town do a documentary about the 30 year anniversary of the filming of the video. They went to the pub and asked if any of the original people that were featured in the video were still around in the town. “Oh yeah” said a local sitting at the bar “there all still around” he said, “just go down the road take the first turn to the left they are all down there”. So off they went, they returned to the pub about 1/2 an hour later looking a bit flustered, “we followed your directions, but it took us to the cemetery”, ” yep that's right there all their" (only in Carinda). I have added a link to the documentary if you would like to see first hand our little town. Also Eccels who is featured in it has since passed.

Now I don't want to make this sound like a history lesson but there are a few quirky things, well a lot but I won't bore you with too many. Now Eccel's house withstood a mini tornado, quite a few roofs were lost around the area and one house was lifted off its footings, the consensus was that Eccel's house had so many gaps in it the wind went straight through. The storm also took out  all the towns power and in the wider area. The service station had a generator so they ran an extension cord from the Servo across the road to the pub (I will add this was after locals and SES tarped, tied and assessed all the damage). Our  Police station has a bit of a funny story too, you see there is a town quite bigger than ours called Quirindi and is pronounced “Carindi" and our town is pronounced "Carinda" close right? Well the plans for the Quirindi police station came to us by mistake, so now we have a double story flash as "Michael Jackson" Police Station, it even has a court room which in used by our bush nurse for weekly medical clinics (only in Carinda would you get your blood pressure checked in a Court Room).

You will notice I say "Only in Carinda" quite a bit through my blog  I say this because, its such a wonderful, quirky place and funny things happen that make me smile and laugh quite a lot, and that I feel extremely blessed to live in this great little spot and call it home.

So what is it about where you live that you love?  Is  it the people and the community, a sense of belonging to something special like me, or is it the climate? Do you live by the sea and love the lifestyle it offers? or  do you live in the city and love all the things that are available to you.  Wherever you live please embrace it and be part of it, get to know your community, it will truly enrich your life for the better.  Also whilst next on your travels if you happen to be passing through a small town, stop, take the time to look around maybe  buy a coffee or some fuel or even a beer, just stop and say “G'day."

Email ThisBlogThis!Share to TwitterShare to FacebookShare to Pinterest
Labels: A wonderful place I call Home

The "Treasures and Gems" hidden in my wardrobe

Last month I spent a day going through my wardrobe finding some "Treasures and Gems" that had been hidden away for years.  I&#... 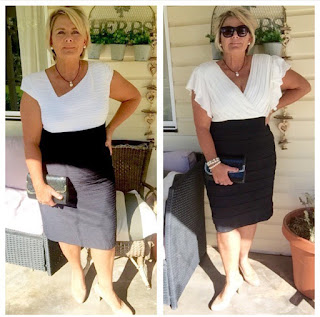 Maz Lifestyle
Hi my name is Maz, I'm 53 Married to a farmer have four beautiful children and live in the Outback of Australia. Thanks for popping in to see what I've been up too and if your a newbie then welcome. I'm all about "Sharing and Caring". If your after a recipe, fashion ideas, DIY, or maybe to read an article I have written, then please pull up a chair and be my guest, I'm glad you stopped bye, and hopefully you find something interesting and informative. Maz xxxx